Cruz y Ortiz in Amsterdam
Rijksmuseum's Renovation
Amsterdam, Holanda
With the refurbishment of Philips Wing, which covers an area of over 3,500 square meters, the Andalusian architects have finished the second part of the restoration of the prestigious Dutch museum

The renovation of the Rijksmuseum, built at the end of the 19th century by Pierre Cuypers, has been carried out in different stages. The first one reassesses the programmatic structure of the museum by recovering the two courtyards of the main building, through which the galleries are organized. These courtyards, now filled with natural light thanks to the transformation of the roofs into glass surfaces and directly linked to a public square, emphasize the building’s virtues, and make it more accessible and attractive to passers-by. Later on, with the Philips Wing project, the architects came across a similar problem and opportunity. Again a scarcely lit courtyard is transformed by adding a glass roof and moving the services, which went under the roof, to the basement. The intervention includes the construction of the entrance to this wing, which was slightly cut off from the rest of the museum. To address this situation, at the end of the Asian Pavilion a tight passageway because of its low ceilings contrasts with the bright atrium it flows out to.
_x005F_x000D_ The main material used for the spaces in both phases of the refurbishment is limestone, the finish of which aims to relate the old and the new. Lighting and acoustic buffering are entrusted to the ‘chandeliers,’ a series of lightweight structures that hang _x005F_x000D_ over the courtyards, and which contrast with the eclectic decoration of the building that, thanks to a meticulous restoration, has recovered the splendor of its original colors. 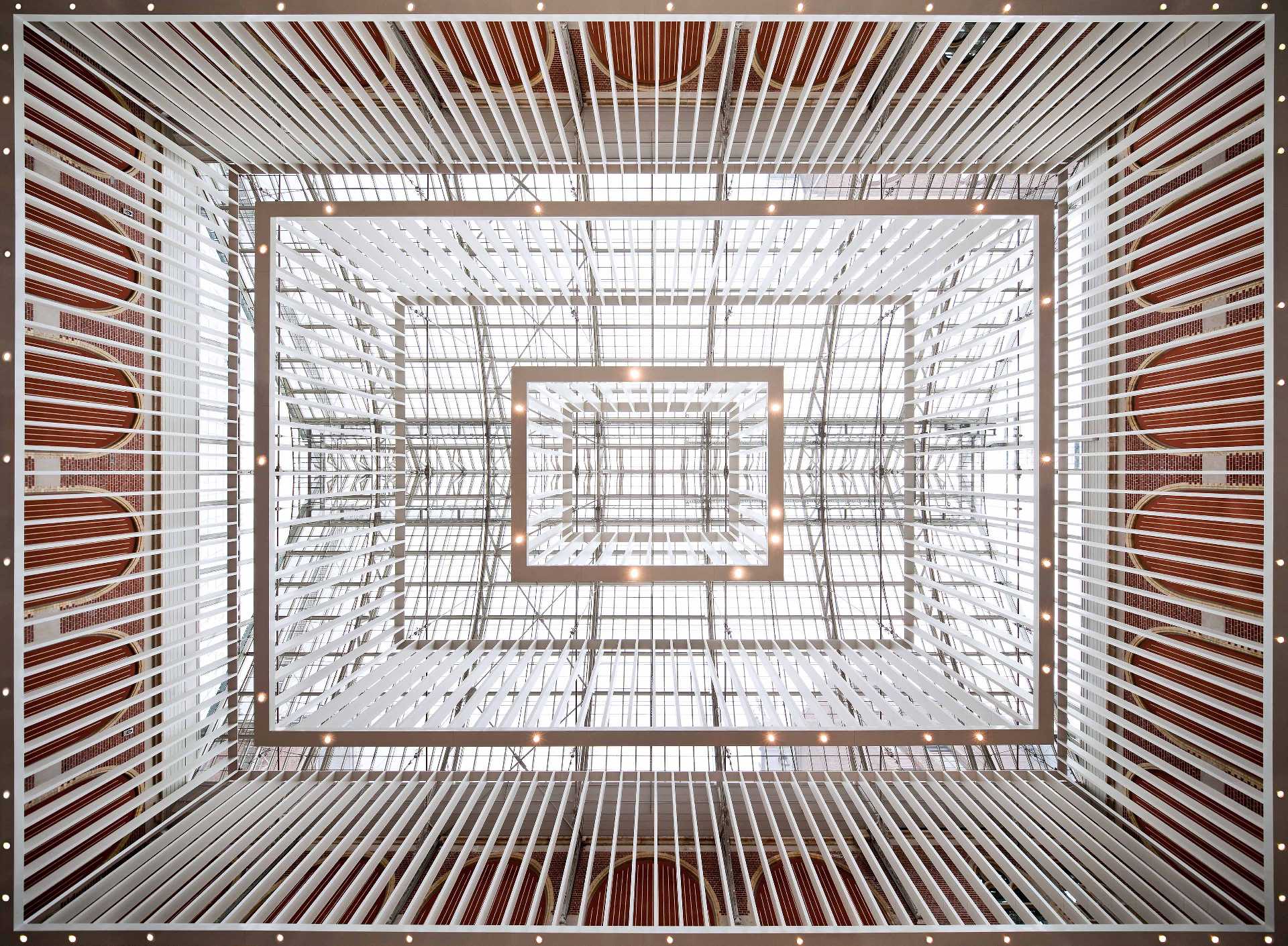 Hanging over the huge glazed ceiling of the museum’s new main entrance hall are the so-called chandeliers, light metallic structures that simultaneously perform acoustic and lighting functions.
_x005F_x000D_ An important part of the project has involved restoring the decoration of the exhibition galleries and regaining their natural illumination, both of which had been lost in below-par renovations. 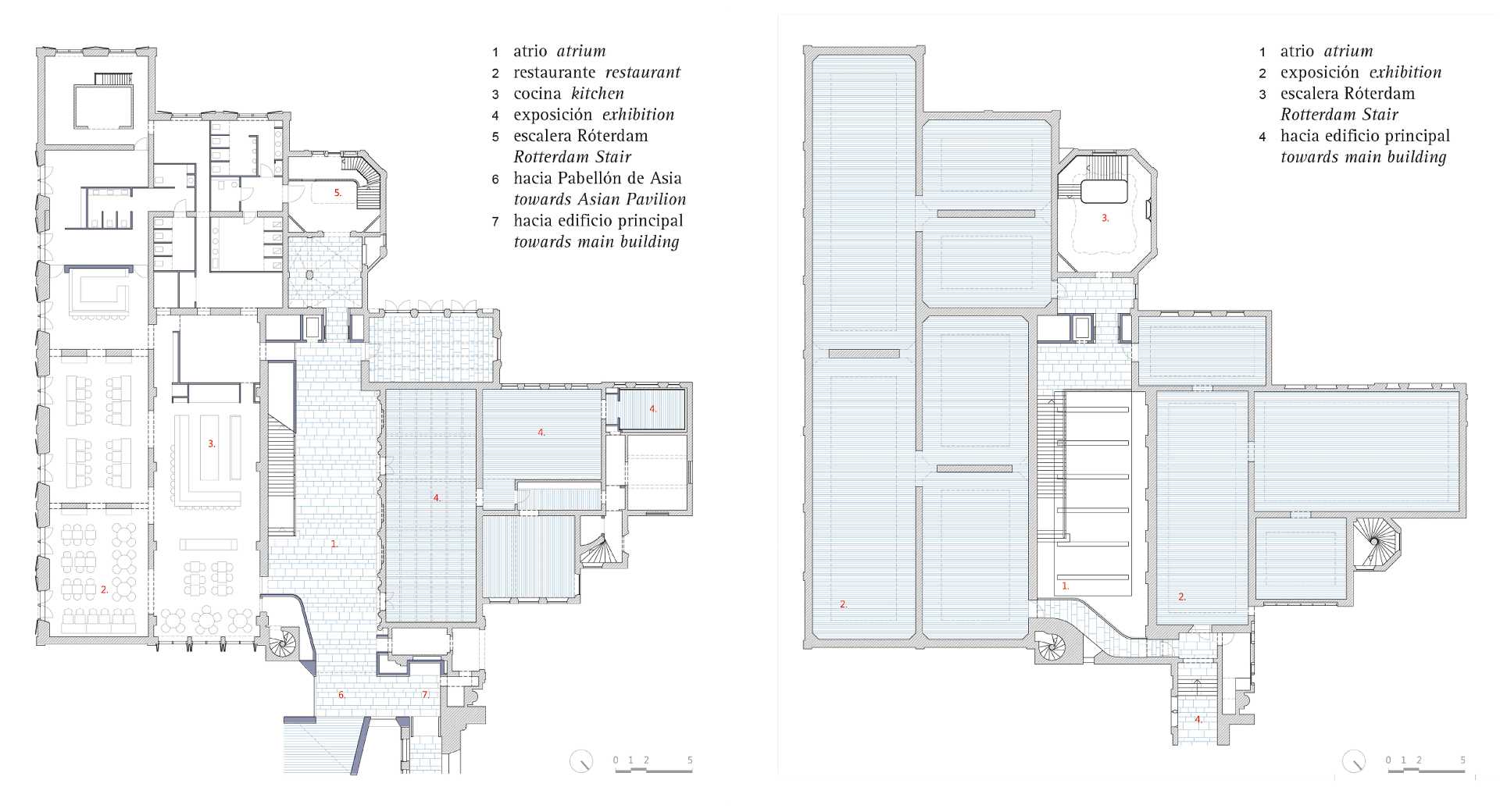 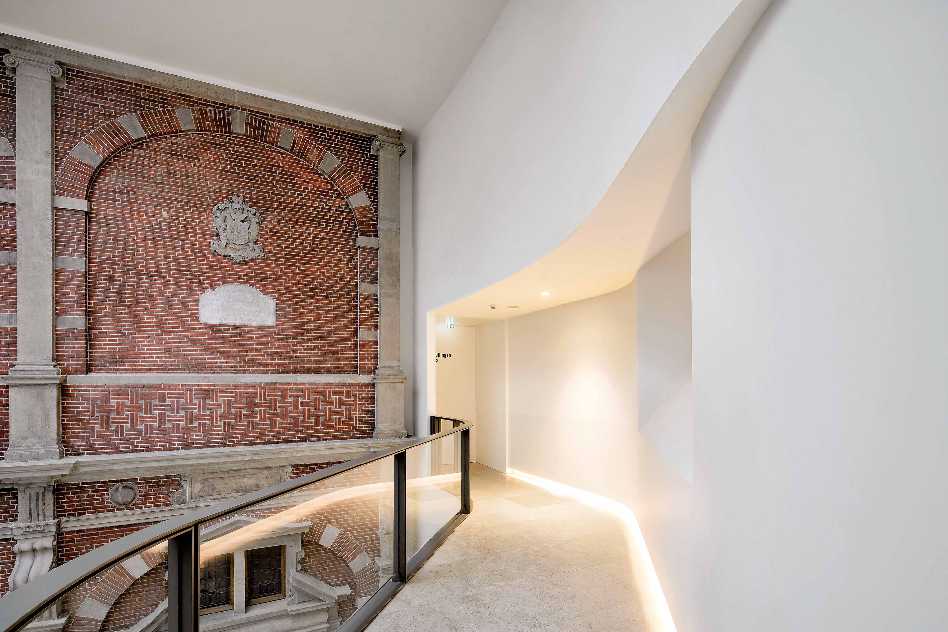 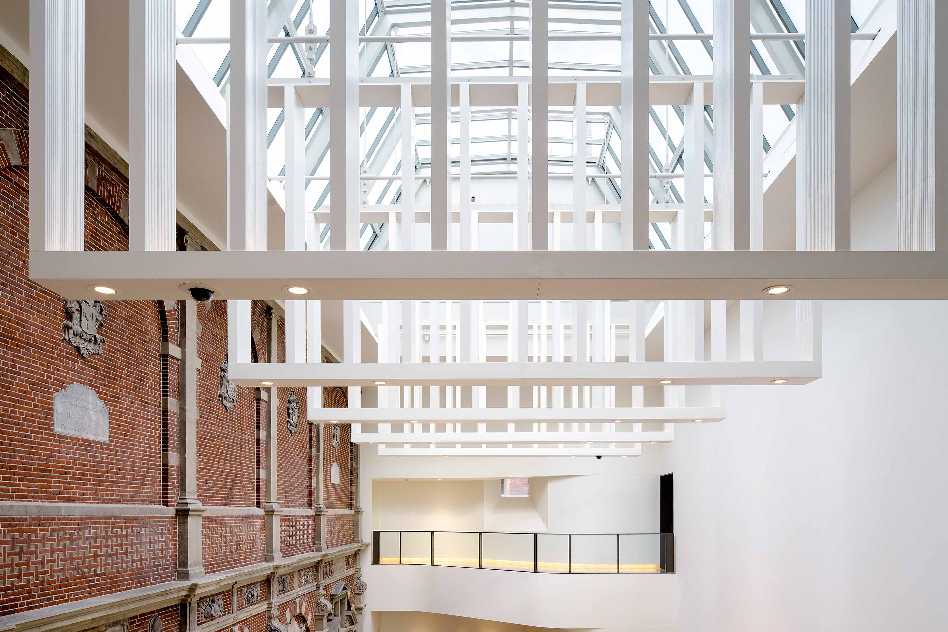 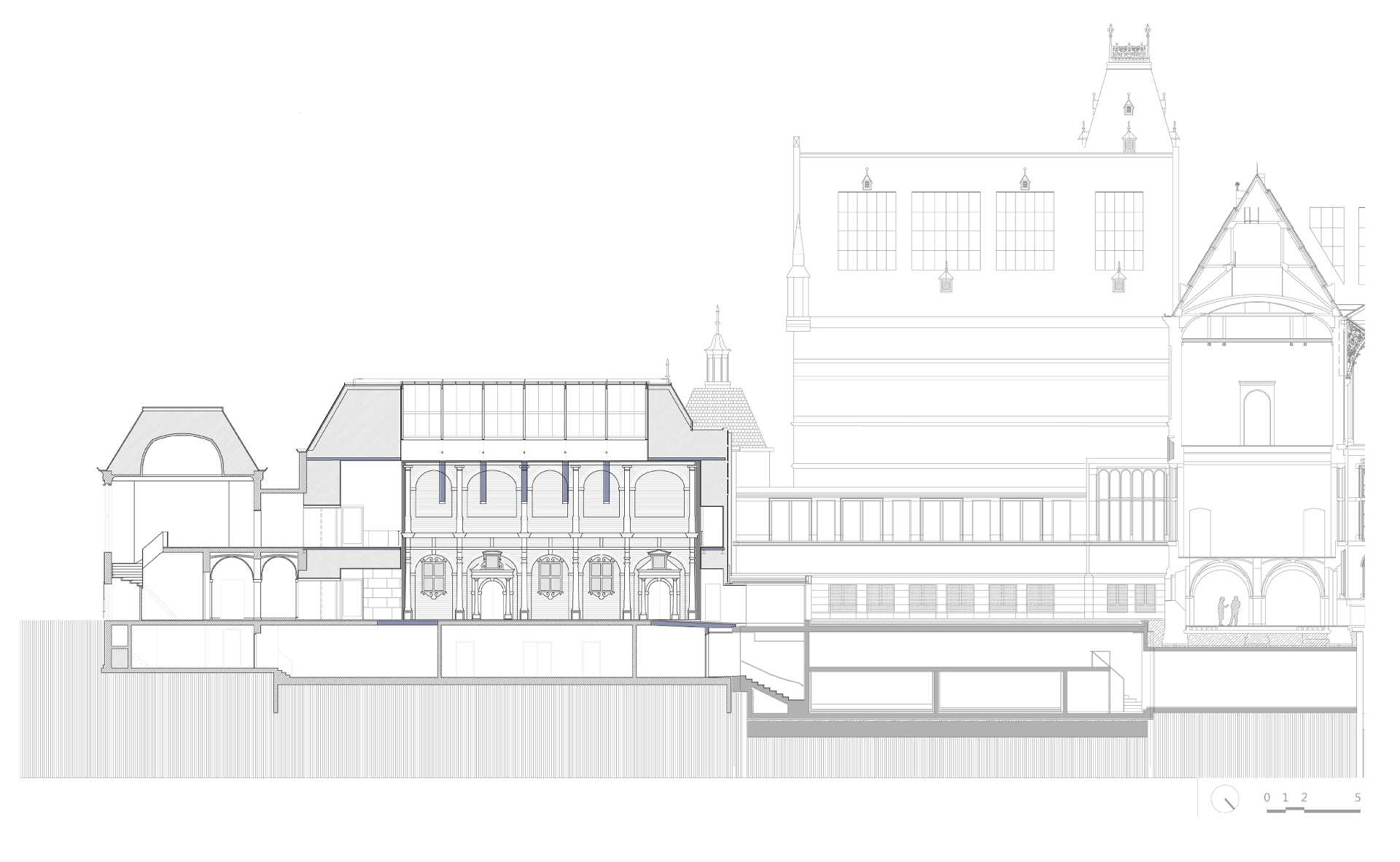 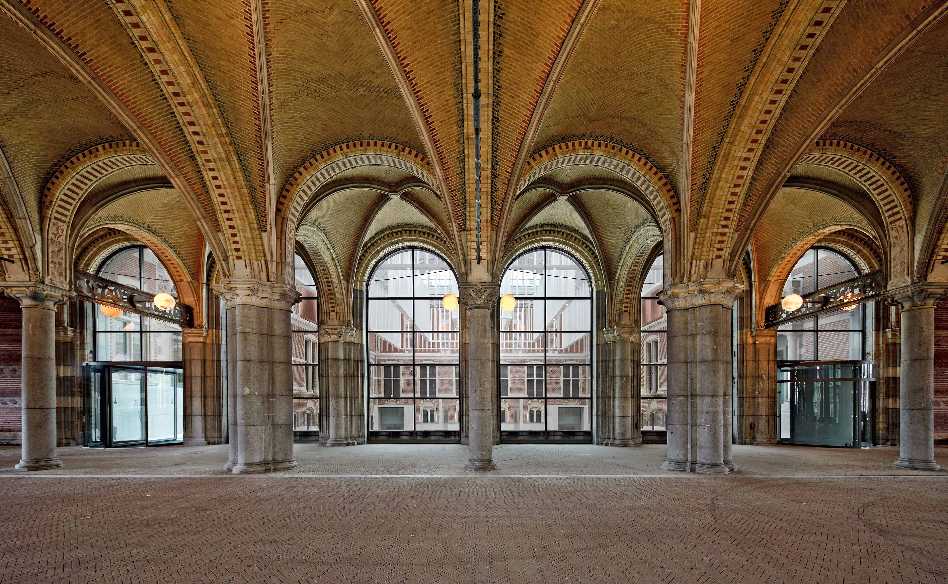 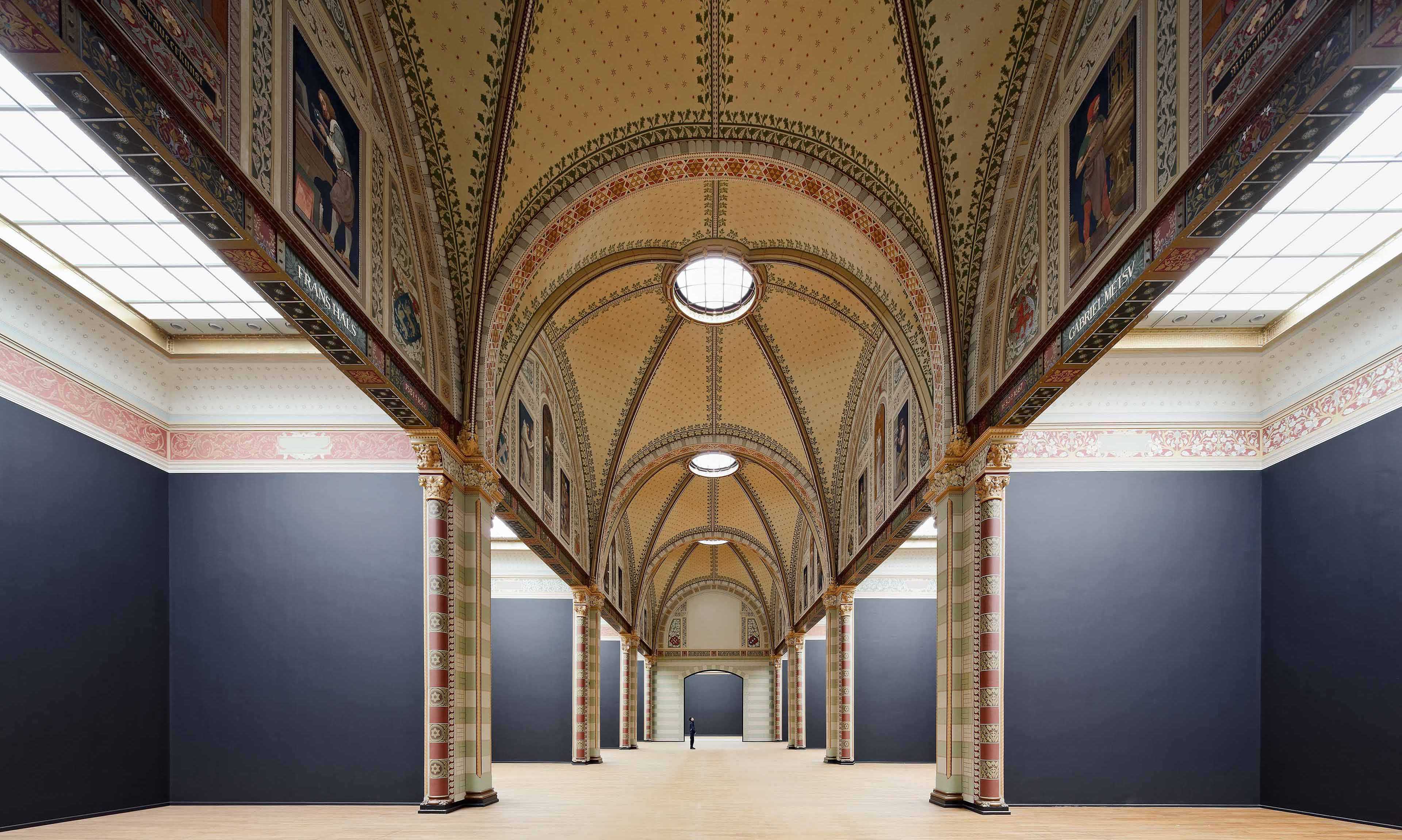