From Here to Ear

In a Scandinavian landscape of sand and lyme grass, 88 zebra finches play experimental compositions on 17 electric guitars and basses. With the installation from here to ear v. 21, the French artist and composer Céleste Boursier-Mougenot has transformed CC’s 600 m2 hall into a giant aviary where 44 zebra finch couples will reside throughout the winter. Flying around freely, the birds will settle on the strings of the instruments as if they were wires between city roofs or branches of a tree. The chirping of the finches and the sounds they make as their beaks and claws connect physically with the electric instruments ll the hall with ambient music. A live concert with no beginning or end.

Céleste Boursier-Mougenot is known throughout the world for his acoustic installations that merge culture, nature and technology. In from here to ear v. 21 we are invited to enter the finches’ territory; a light and poetic soundscape, complete with labyrinthine pathways that we can explore as we witness how the finches gather on the strings, drink from upside-down cymbals in the sand and nest in hanging clusters. The installation offers an immersive experience that stimulates all our senses. Our movements become part of the work, equally important as the finches’ reactions, because our presence in the room affects the birds, prompting constant changes to the unpredictable music.

Céleste Boursier-Mougenot sees musical potential in everything. In this work he builds on traditions established by the experimental art and music scene of the 1960s, including the American composer John Cage. By exploring the sound potential in everyday objects and materials Boursier-Mougenot creates different kinds of systems or structures in his installations. In an often playful way he adds elements, such as birds, that give the work an unpredictable nature. One example is the work aura (2015), where he lets cherry pips tumble down from the ceiling onto an acoustic drum kit, triggered by the detection of activity on the visitors’ cellphones. Or as in the work clinamen (2013), where hundreds of porcelain bowls collide in a pool making unexpected sound compositions.

from here to ear is one of Céleste Boursier-Mougenot’s key works; one that he has worked with and evolved since 1995. Every time it is exhibited it takes on a new form, adapting to its new venue. The installation at CC is the largest version of the work ever staged.

Céleste Boursier-Mougenot (b. 1961) lives and works in Sète, France. Having been a composer with the French avant-garde theatre Pascal Rambert for ten years, he began working with installation art in the mid-1990s, incorporating sounds and stage craft from the realm of theatre in his art. Boursier-Mougenot has presented solo exhibitions at prominent venues such as Musée des Beaux-Arts de Montréal in Montréal, Palais de Tokyo in Paris and the Barbican Art Gallery in London. In 2015 he represented France at the Venice Biennale.

The 88 zebra finches come from a breeding farm in Mørke in Jutland. Zebra finches are native to Australia, where they can be found throughout the continent, and are widely bred in capitivity in Europe. The 44 females and 44 males were selected for their social natures, as they are neither fearful nor aggressive. Following the exhibition, the birds will be returned to their breeding farm.

This variety of bird prefers to live in a group and has no impulse to fly off on its own.

The birds’ daily care (food, cleaning) is carried out each morning by members of Copenhagen Contemporary’s team in accordance with the directions given by the breeder and the Danish veterinarian authorities.

The sound environment is generated by the birds when they land on the strings of the amplified guitars. This is not the case with the cymbals.

A timer activates the lights in the morning and step by step turns them out in the evening, so that the birds can enjoy an optimal rest period. This timer is set to follow the sun’s regular diurnal cycle on a summer day.

CC consulted with a vetelinarian from The Danish Ministry of Environment and Food in order to ensure the birds’ well-being. The bird breeder is also a valuable resource for maintaining the good health of the birds. 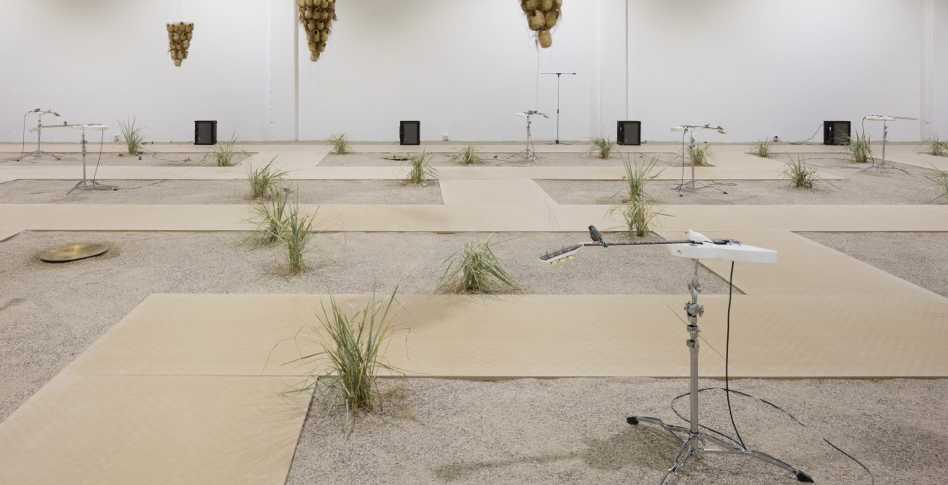 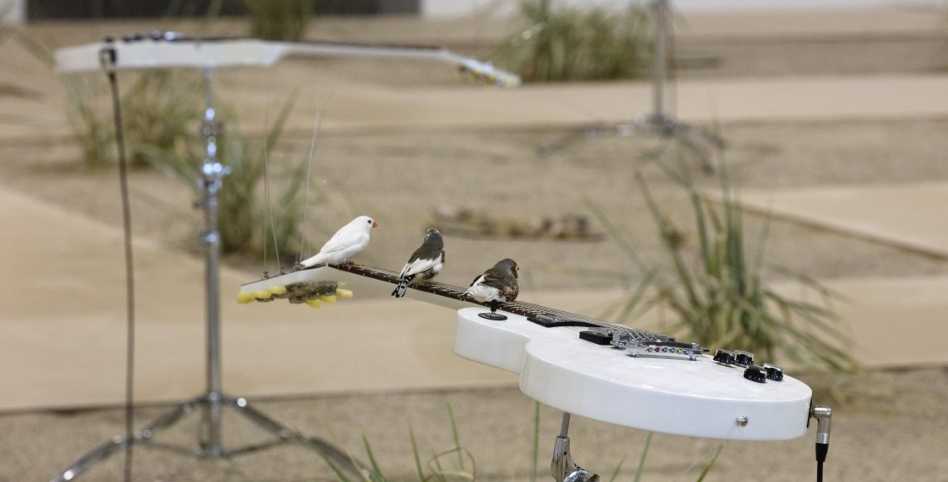