The visits that I made to Cuba with my wife over the last ten years have enabled me to meet many of the community involved with the culture of art and architecture. In part this was due to the overlap between her world of art and mine of design, but we also have a shared passion for exploring contemporary works of sculpture and painting wherever our travels take us._x000D_ On our first visit we met the ‘Historiador’ of Havana, the architect and historian Eusebio Leal Spengler. An early destination was the historic centre of the city which had been lovingly restored under the direction of Eusebio. More recently we attended the XI Bienal de Arte which introduced us to many of the local artists, whose studios we were able to visit later.
_x000D_ With the celebrated Cuban ballet dancer Carlos Acosta, a principal in London’s Royal Ballet, we visited the complex of unfinished Art Schools designed by Ricardo Porro, Vittorio Garatti and Roberto Gottardi in the early 1960s. This stunning group of buildings was funded and conceived by Fidel Castro in 1961 on the former Country Club in the suburb of Cubanacán, Havana’s equivalent of Beverly Hills. The intent was to produce ‘the most beautiful academy of arts in the whole world’. We met with the government’s architect Universo García Lorenzo to explore the feasibility of creating a ballet school for Carlos Acosta in one of the abandoned structures.
_x000D_ On our last visit we spent time with two artist friends, Marco Castillo and Dagoberto Rodríguez, otherwise known as Los Carpinteros. I can recall a dinner with them at the home of Marco, in a suburb of Havana. After complimenting his 1950s style furnishing we were led to the garage below to stare at an Chevrolet Bel Air convertible of 1957, resplendent in turquoise with liberal dressings of chrome. Later we would debate the visual affinities of the styling of the auto designer Harley Earl with the architecture of the same year in the Hotel Riviera which is, incidentally, painted in a similar colour to the Bel Air.
_x000D_ Los Carpinteros had created a major event to coincide with the Arts Festival called Conga Irreversible, which they later issued as a video. Imagine a scene in the heart of the city through which scores of dancers, all immaculately dressed in black, are parading. The traffic is halted as they move, not forwards but backwards, along the streets and squares, all swaying to the traditional music of the dance. The longer this throng travels the more bystanders are swept up and the conga becomes a strung–out line of followers, who in turn move rhythmically to the beat of the musicians._x000D_ Whilst I was photographing this extraordinary happening two impressions came together as I looked through the camera’s viewfinder. First there was the backdrop of ageing buildings and cars, like a time warp of suspended decay that is unique to Cuba. The whole country is a veritable museum of classic American automobiles, mostly from that golden age of the 1950s. In their colours and condition there is a visual rapport between the architecture and the autos, both miraculously surviving the ravages of time. In between these musings the second impression, prompted by my thoughts on the paradox of Conga, was an awareness of change in the air. For example on this visit we discovered that the local real estate market had been opened up by the government and Cubans could, for the first time since the revolution, now buy property.
_x000D_ It seemed to me, as I watched this huge line of people snaking through the city, that soon everything in Cuba might be like anywhere else in the world. Gone would be the exotic vehicles like dinosaurs from an age long past—to be replaced instead by th e technically superior but totally characterless cars of today. In a similar spirit, a newfound affluence might lead to wholesale redevelopment of the very particular and equally exotic mix of styles that comprises Cuban architecture 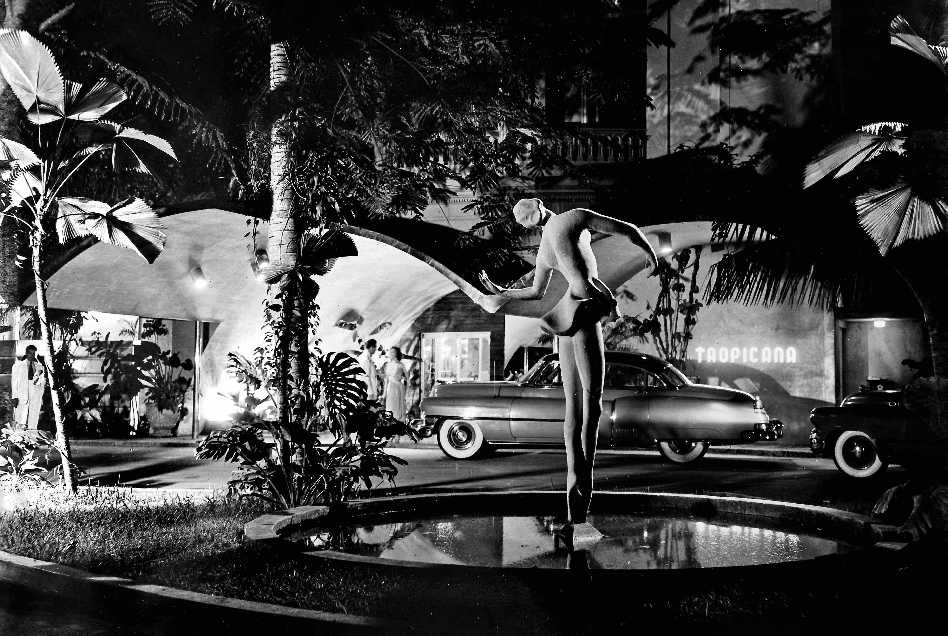 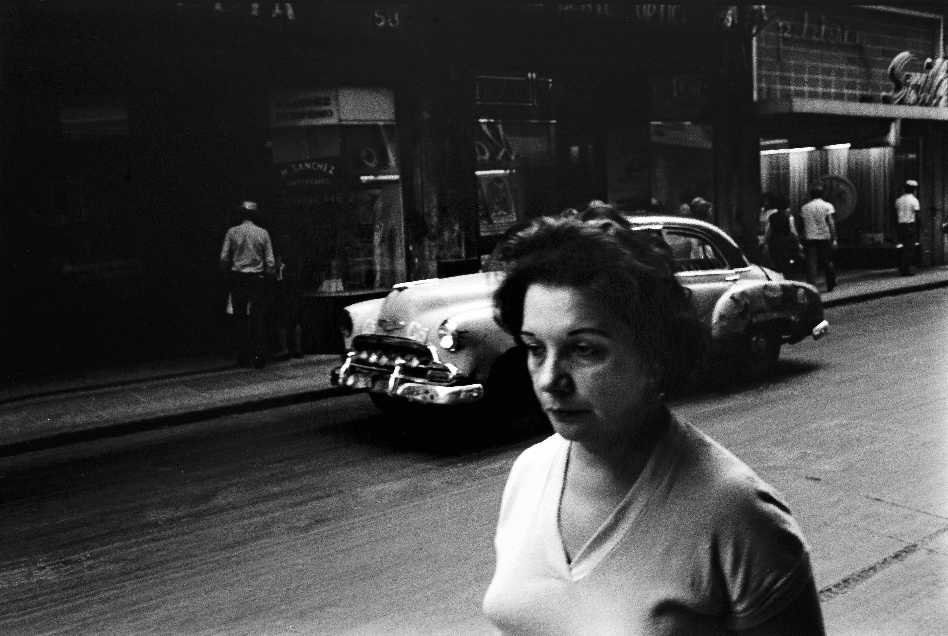 Suddenly the prospect of extinction seemed to threaten the living theatre that is Havana today – where the stage is the street, the scenery is the façades of buildings, and the players, who bring the whole drama to life, are the colourful cars and people.
_x000D_ Thus was born the idea for the book Havana: Autos & Architecture — to make a record for present and future generations as well as lovers of architecture and cars to appreciate a rich cultural heritage — frozen at this critical point in time. I resolved to create it with the best talents that could be found for the task. Elena Ochoa, my wife, and her Ivorypress team was central to the venture. She proposed highly creative individuals like Eusebio Leal Spengler who could write word pictures to summon up the history and spirit of the place; Nigel Young, who has recorded our projects with his technical expertise and a discerning eye; or Mauricio Vicent, who had the idea of bringing forth insights through the recollections of the owners of a small number of important automobiles, mostly spanning more than one generation._x000D_ We decided that the context would be set visually with images of the transition period that marked the unfolding of the revolution. Luc Chessex, a Swiss photographer, went to Cuba in 1961 and lived there for fourteen years. His pictures, now half a century old, appear as fresh as ever, with a wonderful sense of immediacy.
_x000D_ One of his photographs of a street scene in Havana caused me to stop and look again. For the first time I was seeing a visual connection between a woman in the foreground and the speeding automobile behind her. The two of them were given prominence by the inky background which absorbed all the detail – highlighting both of them. I had always been aware of the anthropomorphic dimension of 1950s American styling, but before seeing this image I had not made the sculptural connection between the full frontal of the typical auto of that period and the female form.
_x000D_ Coming back to the start of this piece I remarked on the paradox occasioned by the spectacle of the Conga. To appreciate another kind of phenomenon in the daily parade of American automotive art throughout Cuba, but particularly in Havana, it is perhaps necessary to go back to their ancestral home in Detroit.
_x000D_ There the production lines of the three dominant manufacturers were spurred by the GI Bill of 1944 which enabled war veterans to have access to education and eventually empowered them to buy their first homes. This was followed in the next decade by President Eisenhower’s National Interstate and Defence Highways Act which created a nationwide network of high-speed motorways. The mobility offered by these newly connected ribbons of asphalt encouraged a boom in suburban housing – a new American dream only made possible by the mass production of affordable automobiles._x000D_

Mobility was more than fast trips coast-to-coast, now made possible for the first time. The new generation of land cruisers even symbolised movement when they were at rest. Stylists sculpted them with tail fins derived from the most advanced jet fighters of the day. They exuded power, speed, excess and confidence, with generous dressings of multi-toned paint jobs. The automobile was more than just a mover of people – it had now become a signifier of social standing in a society that was more and more economically mobile. It was an expression of achievement._x000D_ Within the league of the big three manufacturers one’s status and comparative wealth could be charted by the badge names. Moving up the ladder of aspirations the offerings of General Motor started with Chevrolet, rising through Pontiac, Oldsmobile and Buick to the pinnacle of Cadillac. The sequence of Chrysler products began with Plymouth, moved onto De Soto and Chrysler to Chrysler Imperial. The Ford Motor company had its own hierarchy starting with Ford, going through Mercury and ending with Lincoln. For more independent spirits there were niche marques to satisfy exotic expressions of taste, even extending to European imports._x000D_ 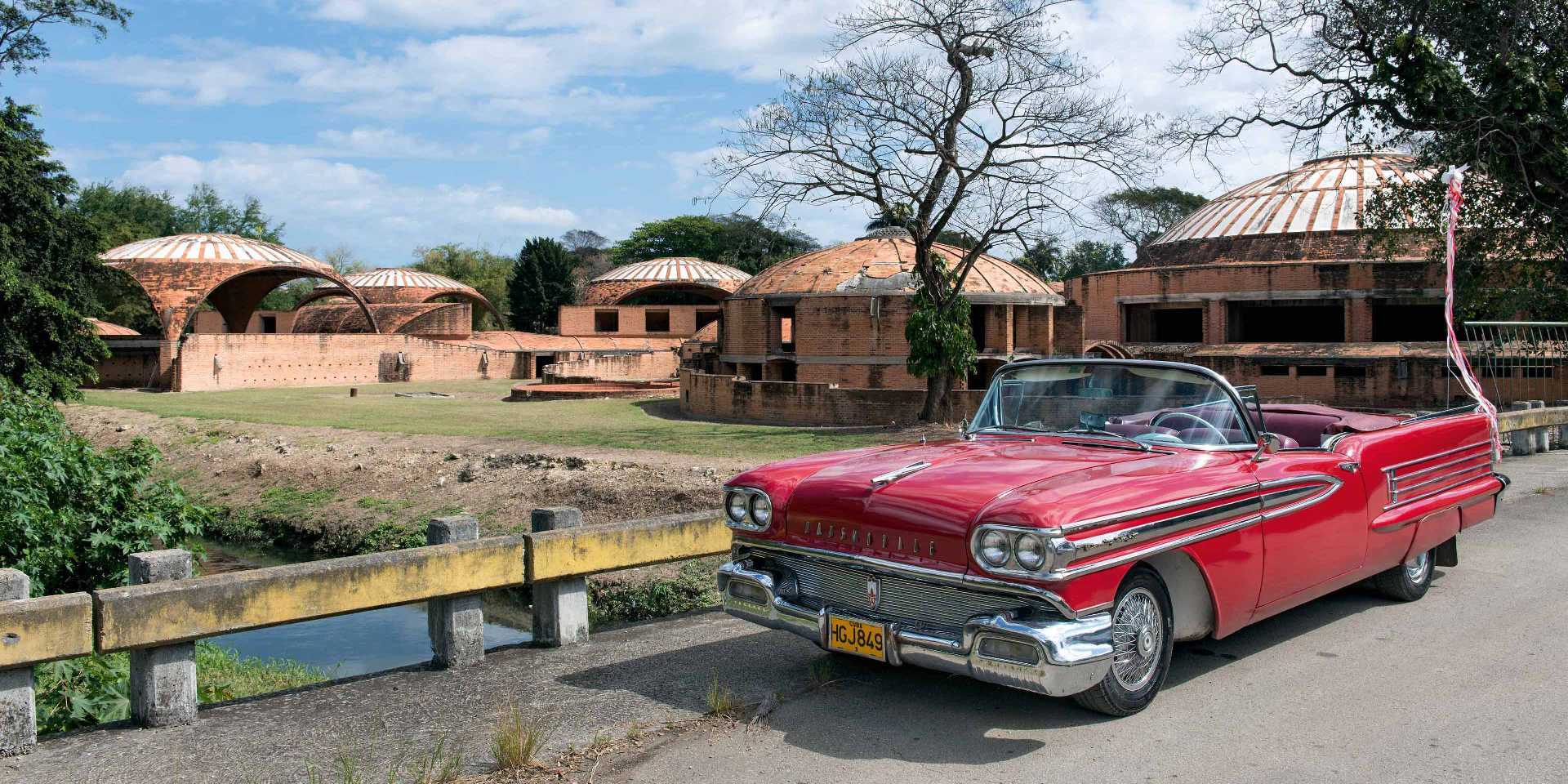 The personal ambitions that were embodied in these various name tags are reflected in the advertising and marketing brochures of the time. The image of the automobile was invariably coupled to an architectural framework of the most desirable residences or a luxury first seems on the surface. The external bodywork, aside from its bumpy patina of layered paint, may be reassuringly familiar. However the plumes of black smoke give clues to the endless recycling that has taken place within the shell by cannibalising imports from Russia and Eastern bloc countries.
Often the growl of an original V8 has been replaced by the clunky knocking of a communist era diesel engine. Notwithstanding this pattern of surgical implants, the American classic car has survived remarkably intact and like good vintage wine they have aged well, with lines that delight the eye even more with the passage of time._x000D_ 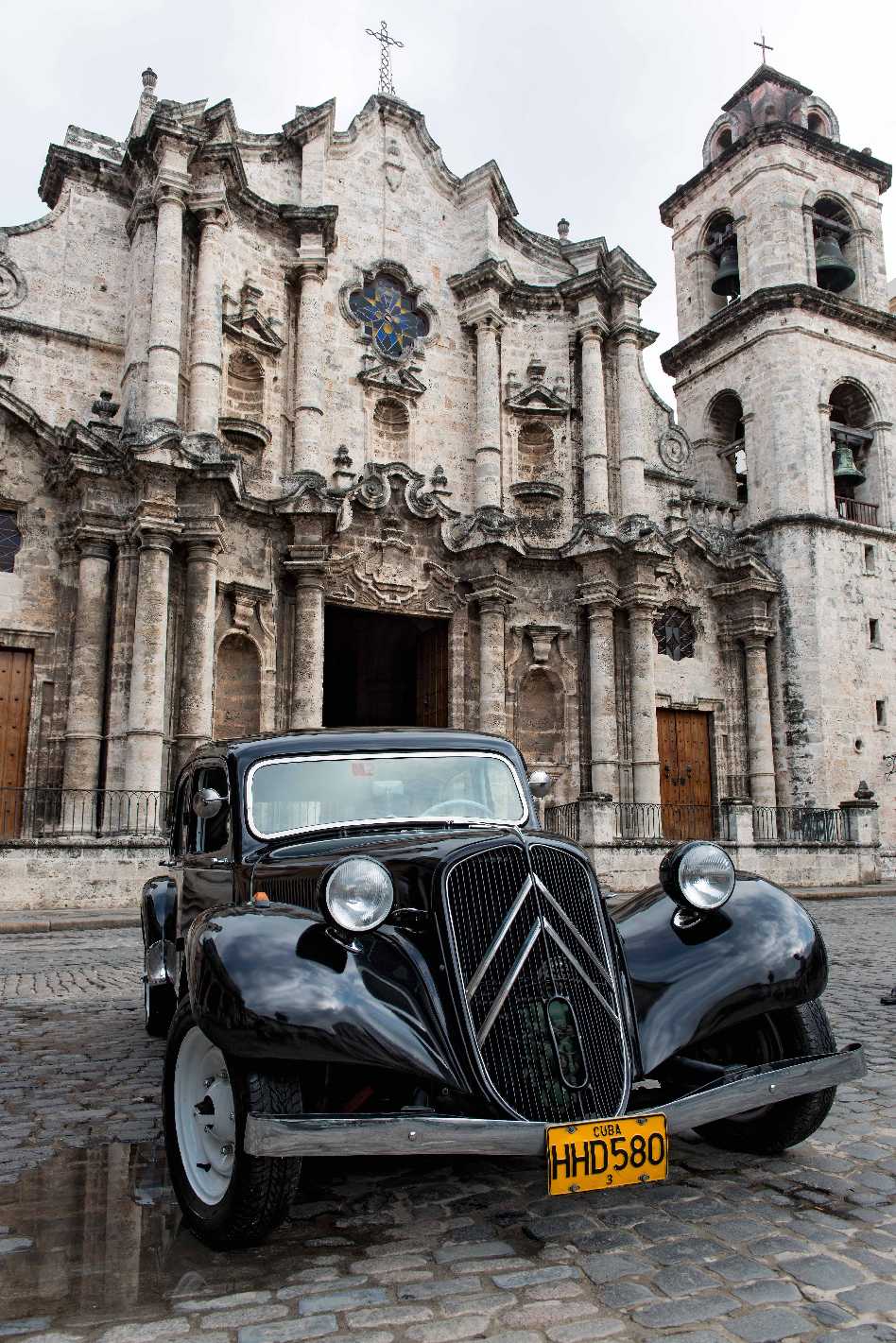 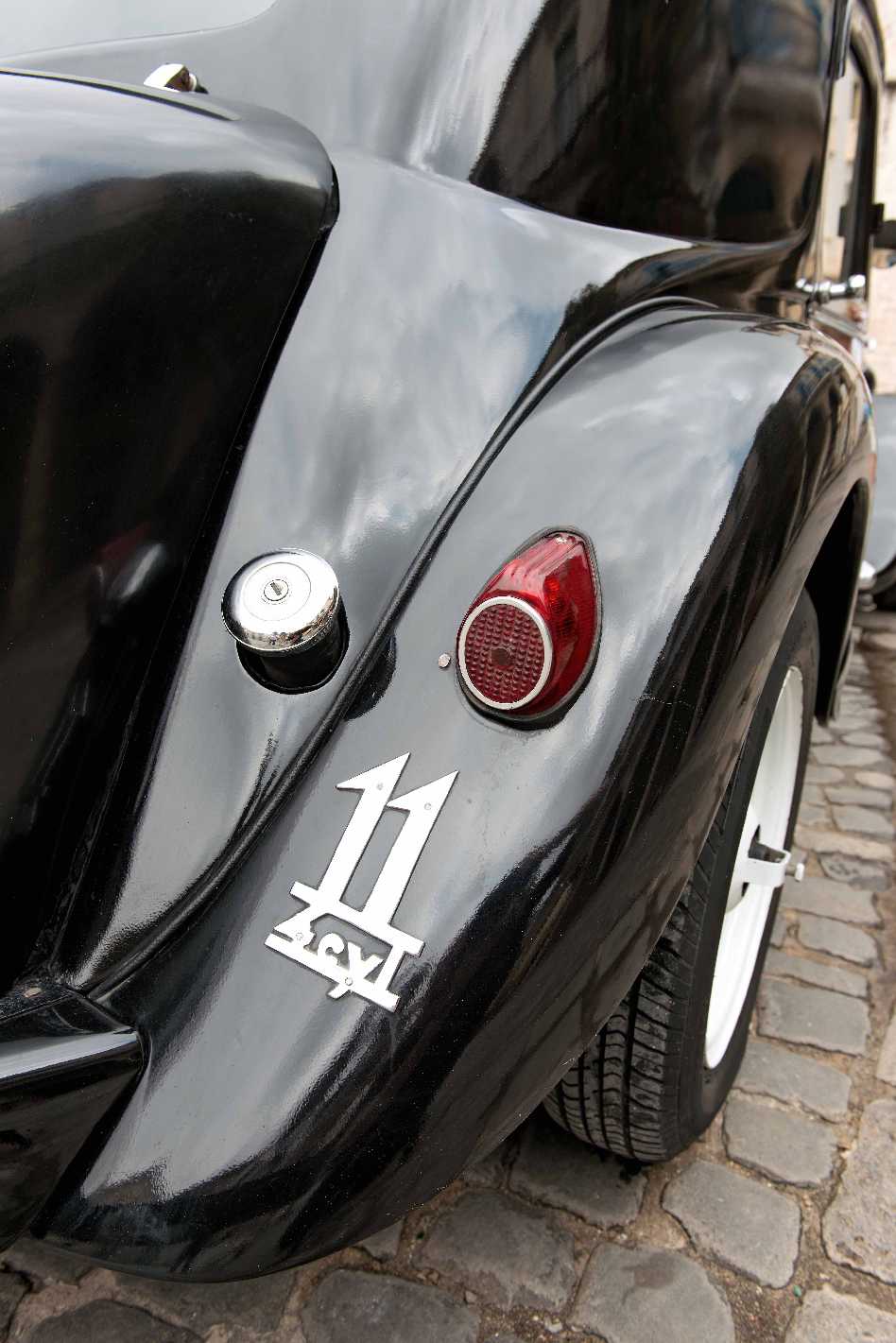 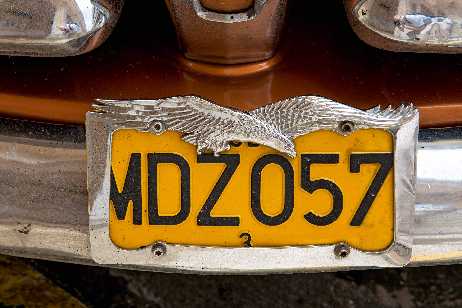 This book is a testimony to the ingenuity that keeps this vast fleet of antique autos moving, largely in the service of the community but there is another kind of Cuban automobile that exists in a parallel world _x000D_ – those of aficionados who have a love affair with original examples and painstakingly restore them to pristine condition, reaching a point where they are newer than new. There are clubs of enthusiasts who come together as groups to display their treasures and compare notes with each other._x000D_ Sometimes in a street you might see one of these immaculate vehicles appearing as if it had just been delivered from the showroom. The paintwork would be perfect and without a blemish; matched by chrome polished to a mirror finish. Next to it could be parked an ancient wreck which is still mobile but has the appearance of a great grandfather relative to its newborn neighbour. Both are recognisably American classics but in every other way they are worlds apart.
_x000D_ However, in the context of Cuba they can still have something in common. Despite political rhetoric and embargoes on trade and travel between the USA and Cuba the owners of both kinds of vehicle are likely to display an affection for Americana visible in stickers and trinkets laden with images of the stars and stripes.
_x000D_ But perhaps the most reassuring aspect of the Cuban car experience is the extent to which pride of ownership crosses the political divide. In a society with the utopian quest to level everything to an equal shade of grey the brilliant colours of the automobiles and the architecture that frames them is unsurpassed anywhere in the world for its sheer flamboyance. Notwithstanding economic strictures and abject shortages, somehow those ancient carriages not only survive but six decades later are still status symbols to be displayed with pride, and their finer points of detail to be the subject of discussion and debate between friends and neighbours. The architectural context of a typical street in Havana may be far removed from the leafy suburb portrayed in a 1950s marketing spread, but the social message is the same. Everything has changed but nothing has changed. Because at its essence, pride in possession and the innate desire for the individual to stand out from the crowd remains the same. 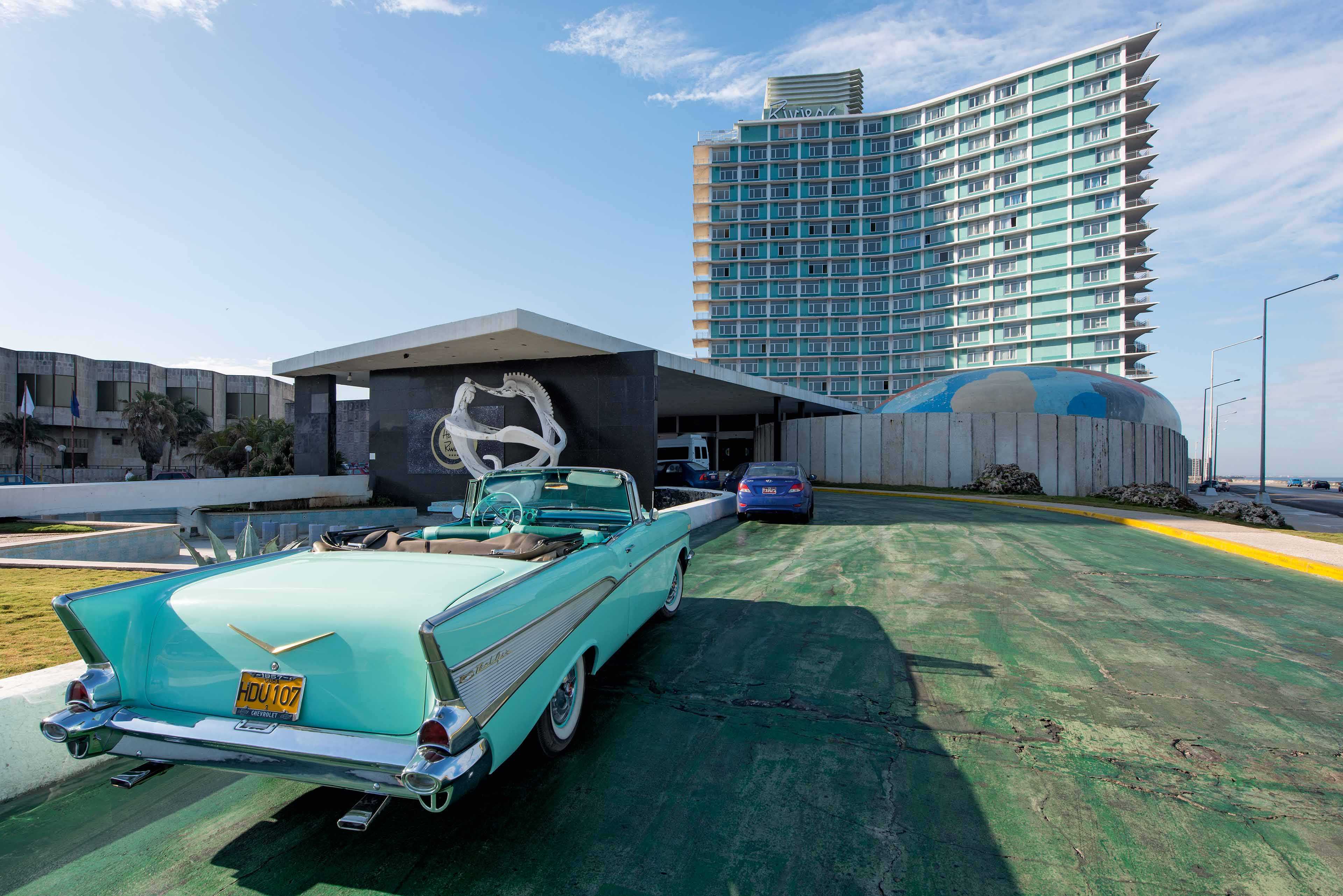 Johnson and Polevitzky’s futuristic design in Hotel Riviera, inaugurated in 1957, responds to the same concept followed in the slender ‘57 Bel Air, designed by Harley Earl for General Motors that same year. Cortesy of Ivory Press