Botín Centre
Renzo Piano in Santander
Santander, Spain
The two-lobed form, which is the outcome of a gradual refinement of the design through the use of models, ensures natural light in the ground floor and directs the gaze of visitors from the park to the water.

The Botín Centre, a space for art, culture, and education projecting into the Bay of Santander, restores the ties between the historical part of the city and the sea. The freeway separating the park from the sea has now been rung underground through a tunnel, making it possible to double the area of the Jardines de Pereda, extending them to the seafront and restoring pedestrian access to the sea for Santander’s citizens. Hemmed in between the park and the sea, and on the axis of the public market, the new Botín Centre is half based on the land and the other half suspended over the water on stilts. This avoids obstructing the view of the sea and the beautiful bay landscape for people strolling in the park, as the Botín Centre is cleverly masked by the foliage of trees. A series of light walkways of steel and glass separate the two rounded volumes of the building and create a new square set above grade and fully public. The two-lobed form of the building provides better illumination of the ground floor and accompanies the view of visitors and citizens looking out from the park to the sea. The two bodies that make up the building are completely faced with 280,000 small, slightly rounded ceramic tiles, pearl-colored and vibrant, that reflect the sunlight, the sparkle of the water, and the rarefied atmosphere of Santander. The east volume houses an auditorium rising to double height and cantilevered over the sea, and to the north, the educational facilities: spaces designed with the maximum flexibility to adapt to multiple activities. In the west volume the exhibition galleries unfold on two levels, characterized by a spectacular double view over the sea and the park. The exhibition space on the upper floor is illuminated zenithally by glass roofing consisting of four layers which protects against stray light and can be used to make the lighting flexible. An amphitheater hewn out of the park runs alongside the Botín Centre, its west facade equipped with a LED display for screenings and outdoor cinema. On the ground floor a fully transparent façade encloses a multifunctional space animated by a café, restaurant, commercial space and the information point. In this way, the inner and outer space are almost indistinguishable and visitors and citizens can see the sea and landscape of the bay framed by the broad eaves of the building. 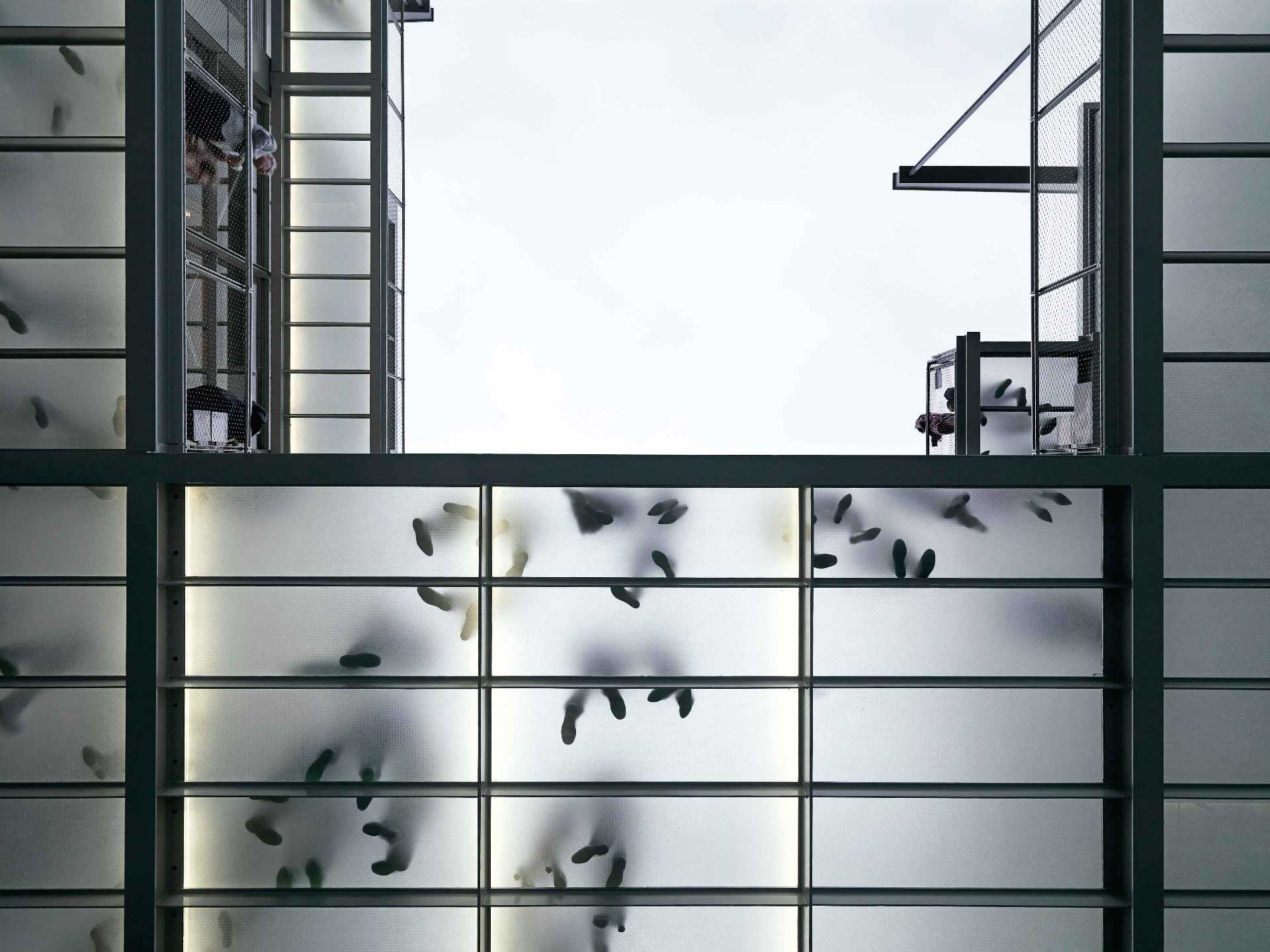 Functioning as a hybrid between a facade and a roof and serving to give continuity to the complex, the envelope adopts the form of a checkered slope where balconies and glass surfaces alternate.
Along with the pursuit of lightness, the most important feature of the building is its careful insertion in the site and its transparency: the two ceramic lobes are separated to frame the sea views from the park. 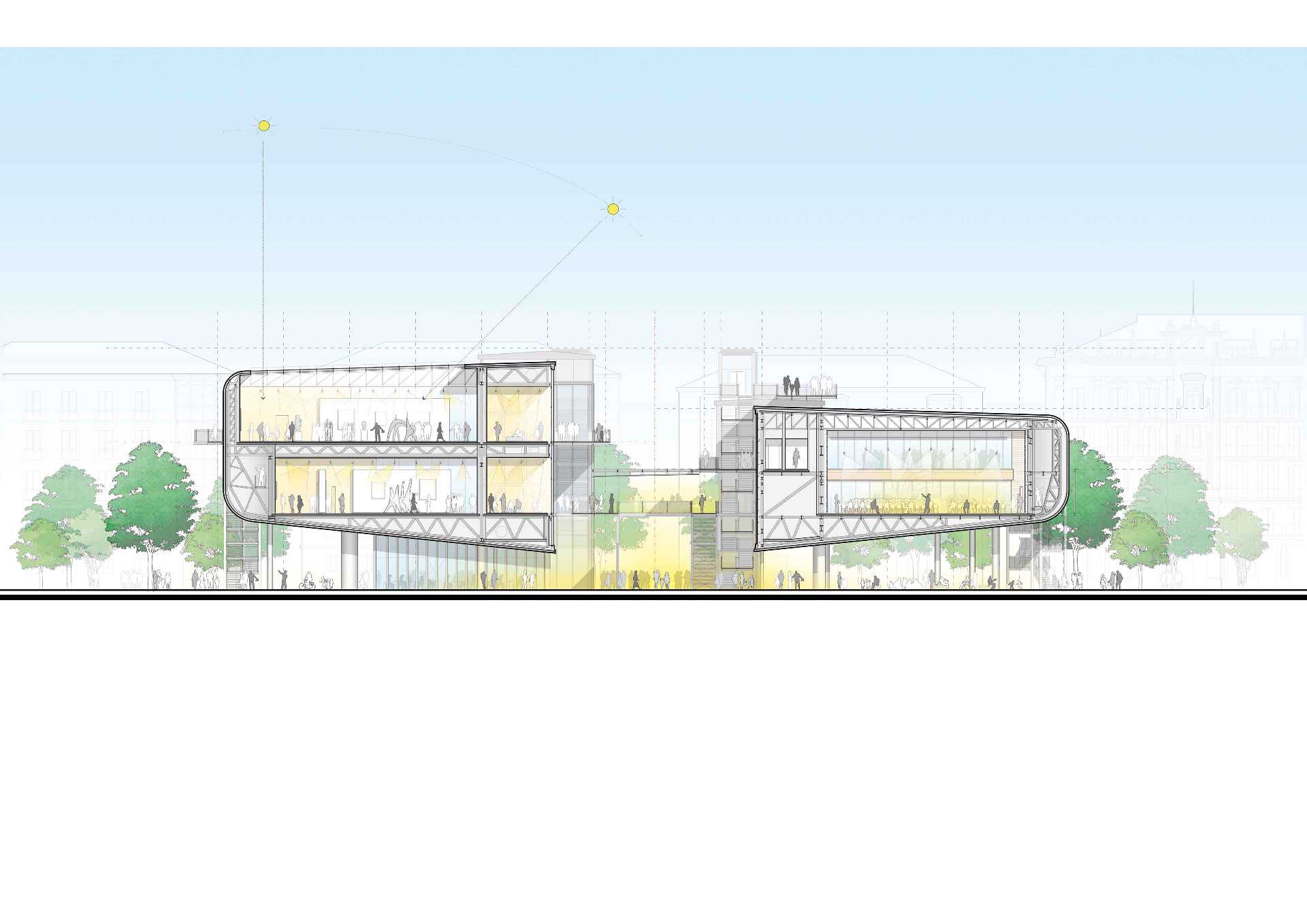 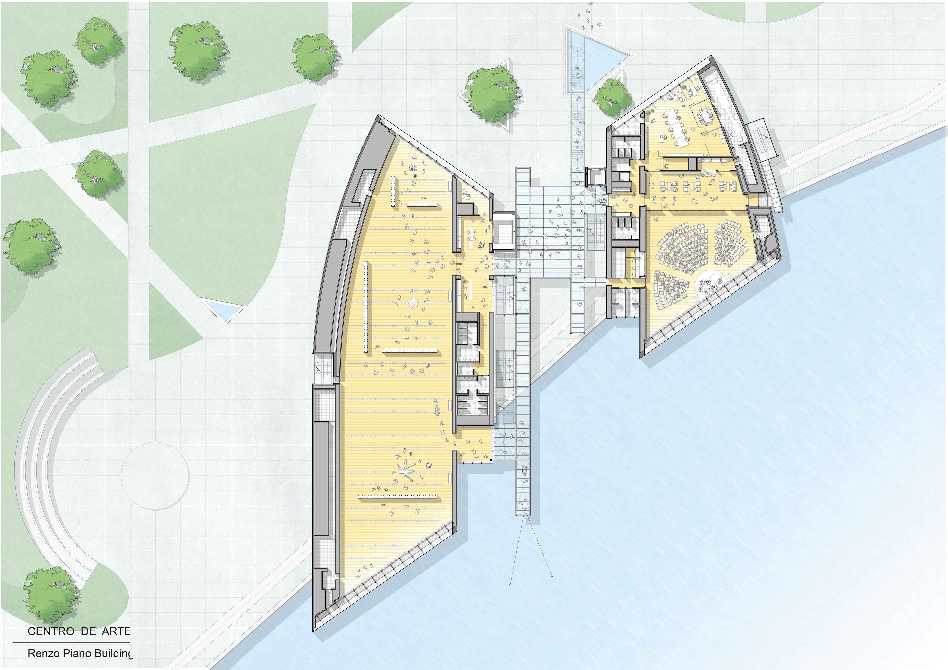 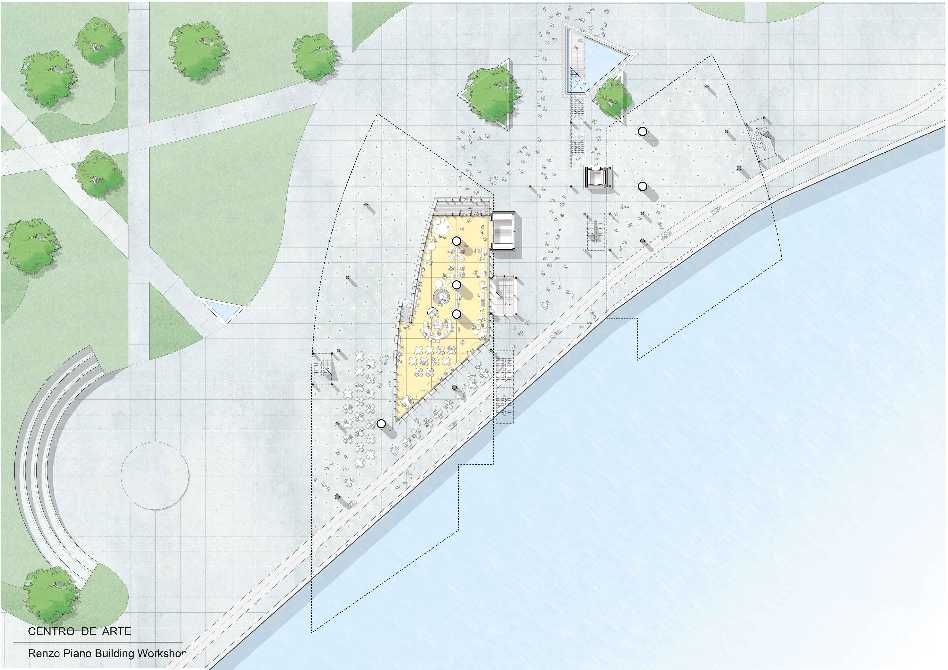